As of 2020, I’ve lived in Berkeley for seven years. I made this to honor the beautiful place I call home.

I recently found a list of every street in Berkeley. I carefully read each one, seeing if I could place it on a map. It was much harder than I expected!

Before I leave, I’d like to visit every street in Berkeley. I first divided every street into a different “section” of Berkeley. Then I’m keeping a list of streets I have visited on foot or on bike.

Of course, this is one of many ways to capture a city’s multitudes. Firstly, Berkeley is a place where people live together. The streets are only shadows of real human stories.

My map of Berkeley 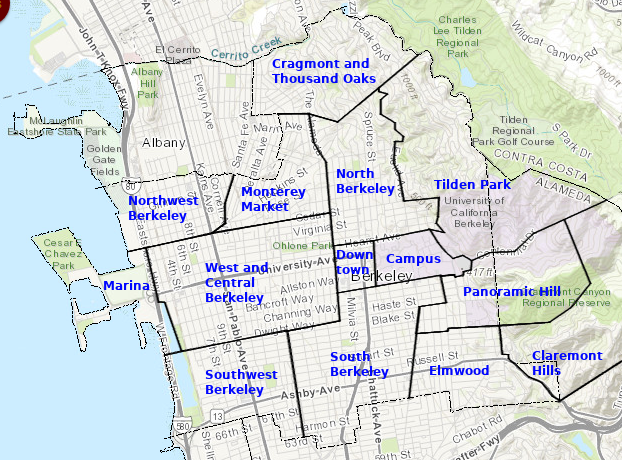 Many street names are actually building names on campus. As a college student, I visited most of this list.

A few names were new to me (like A E Bldg). I didn’t know about the Animal Facility on campus (and I’m not alone)! The Richmond Field Station addresses are actually in Richmond, but UC Berkeley owns the property.

These streets make up the busiest sections of town. I lived here in 2018-19.

I didn’t know that MLK Jr Way used to be called Grove St. Harold Way is a tiny road near the Berkeley Public Library.

I think of my favorite park, the wide and grassy San Pablo Park. I have shopped at Berkeley Bowl West several times, sometimes just for a handful of chocolate chips. Missouri Lounge is a cool place to hang out: half biergarten and half dive bar. The Tssui Fish House is nearby, and Urban Ore is a quirky warehouse full of secondhand items. And the best food in Berkeley gets made here, by the one and only Chef Elmy.

I like Sweet Adeline Bakeshop. Sports Basement has an upright piano you can just go and play. I frequent a local Thai temple’s outdoor Sunday brunch. There’s a tool lending library and open basketball & tennis courts in the neighborhood. Ashby BART has a bazaar-style flea market every weekend.

I lived in the nearby Clark Kerr dorm in 2013-14. My friends and I climbed this hill once to watch the sunrise. When I worked at the Space Sciences Lab in 2019, I often walked down the steep, beautiful fire trails on my way home.

There are a lot of pretty roads in this area, like the tree-lined Alcatraz west of College Avenue. My favorite restaurant in Elmwood is Nabolom Pizza and Bakery. The hills on the east side are challenging and rewarding.

These roads are mostly residential, due east of the Claremont Hotel. The neighborhood is just below Grizzly Peak and the surrounding ridge, some of the highest points in Berkeley.

Riding through here is difficult, but if you can make it up here, head to Redwood Regional Park in Oakland. Some bikers bike to Grizzly Peak from the north side of Berkeley, and zoom through this neighborhood on their way down.

These are the streets surrounding University Avenue. There are wonderful bike lanes and parks, like California St, the Ohlone Greenway, and the Aquatic Park. I lived here in 2020-21.

Vik’s Chaat is a longtime (since childhood) favorite restaurant. I also like Milan for Indian groceries.

Fosters Freeze is a guilty pleasure of mine.

My friend worked at Mi Tierra Foods (grocery and prepared foods) in 2020; I’d visit him often. He’d buy burritos with an employee discount and we’d walk to Strawberry Creek Park or James Kenney Park to eat them.

I love the quiet and calm beauty of the small streets east of Sacramento St (Spaulding, Jefferson, Roosevelt, McKinley).

This area is close to Albany. Notable mentions in Albany: Happy Donuts on San Pablo and Ocean View Park.

I’ve been meaning to see a show at 924 Gilman or Ashkenaz. I peeked in 924 Gilman once; someone was covering a SWMRS song.

This is a cute and quiet area of town. There are rolling hills on the north side. I lived here in 2018.

I like Cedar Rose Park. King Middle School’s garden, track, and basketball courts are open to the public outside of school hours.

Of course, Monterey Market is a special Berkeley experience, preferably in the sunshine.

This is the northernmost part of Berkeley, close to Kensington. The Solano Avenue shopping area is nearby. Rumor has it Billie Joe Armstrong from Green Day lives here.

Indian Rock Park is a local favorite for watching the view on top of a giant boulder and rock climbing. The serene Great Stone Face Park is more isolated but much less crowded.

If you’re biking to Grizzly Peak (or taking the bus!), you’ll take Spruce St through this neighborhood. It’s steep, but less so than most other roads around here.

Because of the elevation, the views are spectacular from almost anywhere in this neighborhood.

Close to campus, students find housing in homes, apartments, and co-ops. Cheese Board Pizza and Bakery is a famous spot, often with live jazz. The original Peet’s Coffee is in this neighborhood.

There are many small parks and winding roads in this neighborhood. This mostly residential area borders a jewel of Berkeley – Tilden Park.

Once I’m on a trail, I feel like I’m in another world. There’s Lake Anza. The train exhibit has a replica steam train you can ride; it’s also fun to watch.

Some of my favorite views are from the Lawrence Hall of Science, a children’s museum. Once, I saw a raptor there; I think it was one of the peregrine falcons that live on campus.

I didn’t recognize a few names of my Berkeley street list. I think they do not refer to streets. “Station” might refer to the Amtrak or BART stations. South Anx could be a building on campus. Oakland is a reference to Oakland, CA.

How I got the data

I first went to this site to get all street names of Berkeley. I copied the results to data.json.

Then I parsed out the street names with this command:

I copied the list of streets into a new file that I will modify:

Then, I divided Berkeley into sections, based on my experience living here. I grouped all streets into different areas of Berkeley:

I wrote a simple program that used this grouping to generate a list of roads for each section of Berkeley.

Some sections of Berkeley have many more streets than others.

Where have I been so far?

When I first made this list, I had traveled on all of the roads on campus, in Downtown Berkeley, and at the marina. But I certainly hadn’t visited them all.

I’m keeping track of what I’ve definitely seen in visited.txt. I can see which streets I haven’t yet visited with this command:

“The city, however, does not tell its past, but contains it like the lines of a hand, written in the corners of the streets, the gratings of the windows, the banisters of the steps, the antennae of the lightning roads, the poles of the flags, every segment marked in turn with scratches, indentations, scrolls.” - Italo Calvino, Invisible Cities